Thoughts On A Painting... 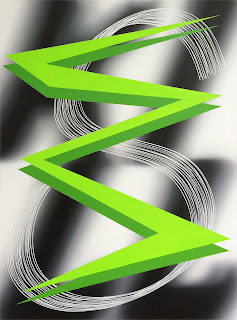 I chanced upon an old National Geographic Magazine that had an article about the Freshkills Landfill site in New York.
It was a piece about the 'trash archaeologists' who were digging into this vast pile of human debris - at one point in the 70's one of the largest man-made structures on the planet.. But what really intrigued me was that this place had such an extraordinary name! Who would call a place that name and why? Those two words 'Fresh' and 'Kills' together - both with opposite sentiments - one positive, the other negative.
Then after 9/11 when the fallout from the twin towers was taken there to be examined and documented - I imagined this place taking on an additionally profound symbolic power. Not just a reflection of the richness of life lived - physically evidenced in the strata of beef steaks and champagne bottles and anything else you can think of in the mountain of waste - but also as a place for sombre contemplation of the violence of death.
A place so aptly and evocatively named - and yet simultaneously so wrongly named. The remains of the bodies from such a catastrophic event being taken and laid out in the 'fresh kills' area of the city? - it seems so harsh. A waste of life lying next to the waste from life... it seems so.. un-'fresh'.
But this is why it's the perfect metaphor. Life is a paradox.
We're confronted by deaths and 'kills' - both fictional and in life - on a regular basis. But the word 'kills' or 'killing' - such a stark set of letters - with such negative and shocking connotations - can - paradoxically - have positive meaning. You can kill it on the dance floor - you can kill me with your joke - or, as in the Roberta Flack song "Killing Me Softly" - you can be 'killed' emotionally. A song about the ability of the singer - or any artist - to powerfully transport, affect and elevate an audience...  to effectively 'kill' an audience..
So the Freshkills Landfill site is now being regenerated into a recreational park and wildlife centre. Its going to be three times the size of Central Park and take 30 years to complete. Such a positive symbol of humans continuing capacity for invention and healing. A 'fresh' start if you like... and bringing to mind the universal notion - "from death comes life"..
This is what I was thinking about when I was creating this painting...
Posted by Mike Edwards at 13:13